The Head Nurse who’s almost 40 whispered as he changed Su Wan’s bandage: “That mountain road ah often collapses. That day when all of you met with mishap, another place also collapsed. Those people weren’t that lucky. Quite a few cars of people died ne. This incident also appeared in the newspapers. They said that the million dollar luxury car was also scrapped. Truly a pity.”

Su Wan slowly closed her eyes. In her memory was the scene of the bus she sat in that day. They came across  large traffic accident after travelling for a long time. The road was sealed and Qi Mu had to turn around and take another smaller path, and then afterwards……

It turned out to be a car accident.

That explained why her head hurt and her memory was confused. Don’t know how the others were. Yi Zi Xuan ne?

Thinking till here, Su Wan called for the Head Nurse who was just leaving: “My schoolmates, those companions who were in the same bus as me, are they alright?”

“Oh, you’re asking about them ah. There are two who were just bruised. They were picked up by their families and discharged just this morning. There are still four more people and you who had similar injuries who still need to stay in the hospital for observation. The remaining two people had more serious injuries and are still in a coma in the ICU. However, they should be out of danger after tonight ba.”

After the Head Nurse finished speaking, he quickly turned and left.

Su Wan struggled to get up, wore the slippers on the floor and slowly left her room.

She kept inquiring along the way and finally smoothly arrived outside Yi Zi Xuan’s ward. The scene inside the ward could be seen from the small window on the door of the ward. Yi Zi Xuan wasn’t staying in the ward alone. He was staying together with Qin Lu.

The two people were on the bed at the moment. They were facing each other as if they were chatting.

Su Wan looked at the bandage on Yi Zi Xuan’s arm. Seeing that there weren’t any major problems with him, she calmed down. She hesitated to leave. In the ward, Yi Zi Xuan suddenly had a feeling to look at the door, and the two people’s eyes unexpectedly met.

Qin Lu looked at Su Wan and then discreetly glanced at Yi Zi Xuan who was on the other bed: “You came to see us?”

Su Wan answered in a low tone: “Both of you aren’t injured seriously?”

Qin Lu heartily smiled: “We only suffered a minor injury, it’s not a hindrance at all. What about you?”

“I also didn’t have serious injuries. Just occasionally have a bad headache.”

Su Wan lightly rubbed her forehead as she spoke till here: “I feel like I forgot something, but I can’t remember what.”

Every time she had a headache, it would hurt and she would be mentally confused. By the time the pain passed, Su Wan’s body would feel unwell all over. She always felt that something very important was missing from her memory, but she just can’t remember.

“Was it because your head hit something during the car accident? You really have to check it out ah!”

Qin Lu looked at Su Wan with a face seemingly full of worry and couldn’t help but remind her.

Su Wan nodded. As if she thought of something, she couldn’t help but ask: “Qin Lu, I heard from the Head Nurse that there were people still in ICU who hadn’t woken up. Who are they ah?”

Speaking of this matter, Qin Lu’s expression wasn’t too good: “At that time, the two of them sat at the very back, and according to the doctors, the stone that fell from the mountain happened to hit the tail of our bus.”

So that’s what happened!

Su Wan carefully thought back on everyone’s seating positions. Qi Mu sat in the driver’s seat at the very front, Fan Shu Jun sat at the front passenger seat. When she just got onto the bus, the two people seemed to be discussing a lot of questions about playing games. Behind Qi Mu was Fang Tian Tian. On Fang Tian Tian’s right was Meng Ting Yao. Sitting in the row behind was Yi Zi Xuan, Qin Lu and Chen Yu Feng. Bai Xiao Yue, who was always unsociable sat alone at the last row. 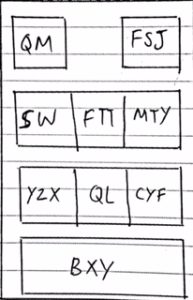 Blu: I put up the seating arrangement for you guys (*＾∀ﾟ)ъ

While they were on the road, Su Wan and Fang Tian Tian were listening to songs. Afterwards, Qi Mu took the initiative to look for her to have a chat. She kept chatting with him and didn’t turn back to look at the scene behind her.

According to what Qin Lu said, Chen Yu Feng and Bai Xiao Yue were sitting together when the accident happened.

Perhaps, at that time, Chen Yu Feng scurried to the back because he had something to chat to Bai Xiao Yue about?

After coming out from Qin Lu and Yi Zi Xuan’s ward, Su Wan asked another round and finally found Fang Tian Tian and Meng Ting Yao’s ward. She went there for a look and saw that they also weren’t seriously injured. Fang Tian Tian looked as she did in the past. Timid and talkative. Once she pulled Su Wan into a conversation, there would be no end to it. She also discreetly asked about Qin Lu’s injuries, thinking that she hid it well.

As a matter of fact, it wasn’t a secret at all that Fang Tian Tian liked Qin Lu. Only Fang Tian Tian thought that she hid it very well. Qin Lu was also very dense and couldn’t see through her thoughts.

Su Wan also went to look at Meng Ting Yao. The relationship between the two people on normal days was just average. Meng Ting Yao wasn’t a person who spoke a lot. She had always been like goddess who set herself above the masses. Su Wan felt that this kind of person and herself had never been in the same world.

Just like right now when they were hospitalised, everyone stayed at an average ward while Meng Ting Yao stayed in the VIP room on the 5th floor even though she was also lightly injured. Furthermore, there were special nurses to care for her.

Although the teacher said that everyone was equal, Su Wan felt that people were divided into various grades and ranks from birth.

This wasn’t something that you could choose on your own.

Just like her, just like Yi Zi Xuan, just like Meng Ting Yao and Chen Yu Feng those kind of people. Chen Yu Feng was born with with a golden spoon. His life was superior and he didn’t have to worry about food and clothes but Yi Zi Xuan was poor from a young age. He had no choice but to rely on himself. As for Su Wan ne? She was born in an ordinary worker’s household. Although she wasn’t as impoverished as Yi Zi Xuan, she still knew that her parents worked really hard and it wasn’t easy for them.

So, more than half a year ago when Yi Zi Xuan said that he wanted to bring her back to the small mountain village after graduation, Su Wan refused.

It can be said that she was materialistic and also vain. She had always rationally thought that love wasn’t everything there was to life. She wished to have a better life. She seeked a better environment for her and her family. What’s wrong with that?

Returning back to her ward, Su Wan was very tired. The moment she closed her eyes, she used her strength to recall everything that passed. She slightly sighed.

She was somewhat sentimental. What’s passed has passed.

Unconsciously, Su Wan evenly breathed and drifted off to sleep.

The ward was dark. It was unknown when but the blue curtains of the windows suddenly violently swayed. As if it was forced open by someone. With the forceful pull of the curtains, you can see the clean windows and the moonlight outside the window.

BLU: I was gonna ask why the scary part reappeared, but I realised that we’re only halfway through the arc. There are 9 more chapters, I think.

Oh yeah, I’ll do that summary thing for the 1st and 2nd arc after I’m done with the 2nd arc. I forgot about the 1st arc summary bc of my exams. Sorry ’bout that guys m(_ _)m