Chapter 37. How To Kill Time

The next day, we enlisted the help of Demonic Walker to move to the Zaiman Desert. Our destination this time was the Arachne's Nest, a city built by summoned people atop a giant mechanical spider. This was where our next target, the Thief, lived.

His power was [Time Manipulation], an ability that allowed him to see into the future. This probably allowed him to foresee our arrival. The members of the special task force weren't used this time, at my request.

"Hah… Kuh… I can only… Take you this far. I can't teleport inside the Arachne's Nest, because, hah, the Arachne has a barrier cast around it."

Demonic Walker was drenched in sweat, despite the cold weather. It seemed that he used a large amount of his stamina to get us this far.

"Wow, you're pretty useful. Sure you can't stay with us for the rest of the mission?"

"Huff… It's not like I can leave the front lines for long, after all. Ah! But if you do contact me at some point, I'll be sure to find time to come down."

I could tell what was going on. The teleporters probably got tasked with the supplies. Because their numbers decreased, the amount of work they had to do probably increased as well. Losing one in the front lines would probably be a massive loss. Necro put his hand on the Demonic Walker's shoulder to praise him.

"Oh, right, right. I didn't think about that. This is good enough. Thank you for your hard work."

"Thank you! I'll be going back then."

Demonic Walker stepped back, and saluted the three of us.

He's loud. And what's up with his eyes? He's looking at me with eyes filled with admiration?

Was it because I got revenge for him? Because I killed the Warrior? His eyes were quite annoying. Once Demonic Walker left, I put up a giant container building on top of a hill. The building itself was worth 1,500,000 dollars. Necro and the saint let out an audible gasp when they saw what I did.

There was no need to buy a tent if I had all this money. Plus, there were still eight hours till the land spider would arrive. I was planning on analyzing [Time Manipulation] in this house. I went inside, and opened the report on the Thief at the kitchen table.

The man's name was Chrono Historia, which roughly meant "History of Time" in English. I kept reading his report, and ended up stopping at a certain place.

"He was discriminated against because he was black?"

The saint, who had been making a cup of hot cocoa for herself, answered my question.

"Racism exists in this world as well, after all. Well, rather than be discriminated for his skin color, it was more because he couldn't hide the fact that he was from a different world."

"Wait, he was discriminated against because he was from a different world?"

"It's not that surprising, is it? Discrimination is born out of differences. Those of different worlds have been looked at with a positive light thanks to the Hero, but it was pretty darn bad back then."

I haven't even heard of such a thing happening in the history textbooks.

"Just thirty years ago, people from other worlds were lower than slaves. It was common enough to hear about them waking up without any of their limbs after drinking some tea in an inn."

"So I guess I came at the right time."

The saint clicked her tongue at that.

"People are still dying because of discrimination around the world, and you still have the gall to say that, Mr. Murderer?"

"Why wouldn't I? If you don't like it, you might as well strike down the forces of evil yourself. But you won't do it, right? Because it's dangerous. You can act like a good person, but you can't do good when it really counts."

Who cares? I ignored the saint, and continued to read the report. 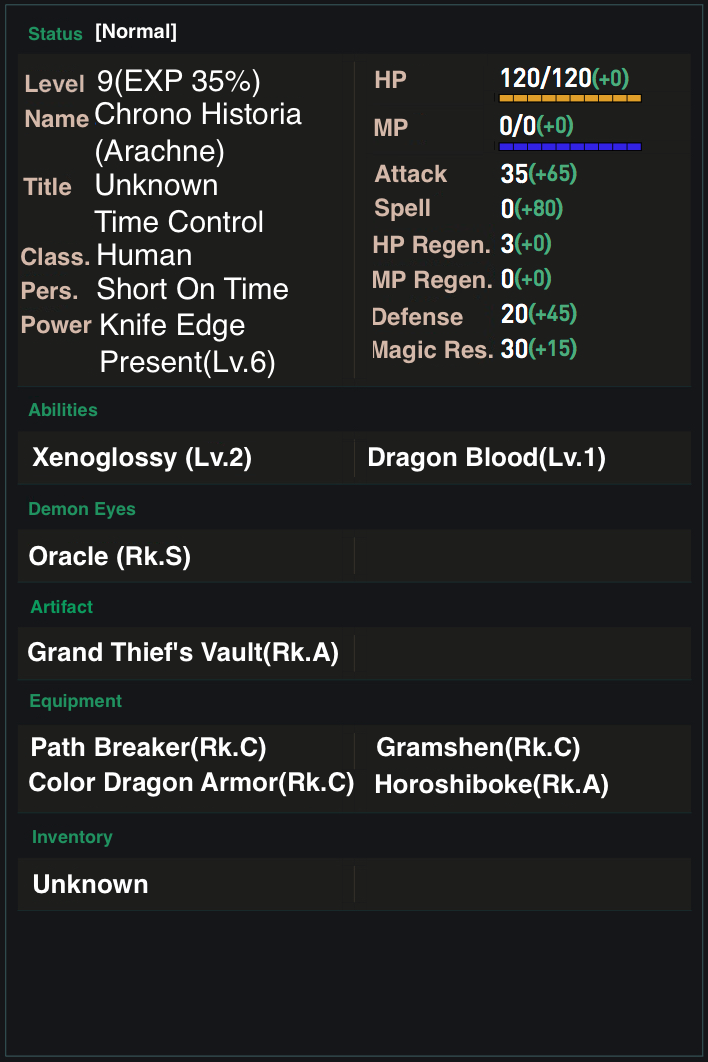 The Thief's stats didn't seem all that outstanding compared to the Warrior. His skills weren't really anything either.

[Grand Thief's Vault] – An artifact that could only be earned by a thief that gained recognition from god. Appears in the form of a tattoo on the back of the hand. The left hand stores objects in a different dimension, and the right hand summons the objects that the left hand took.

It was an ability similar to my Vault. He must have amassed his money there. According to the reports, the amount of cash he has should easily be above 200,000,000 dollars–. His items didn't seem normal either.

How fitting for the Thief. It allows him to escape traps easily.

– A magic weapon that can be worn like a cloak. It was created using the spirit form of the beast Gramshen.

– <Shadow Feathers> It is possible to throw the shadow feathers on the cloak like a knife. It is no different from a normal knife, but those hurt by the feather will become cursed. No matter how the knives are thrown, the knives will never fail to hit its target.

– <Shadow Restraints> If the feathers hit the shadows of its target, the target will become unable to move.

The feathers shouldn't be able to pierce Hirgenrel. I suppose I'd just have to be careful of Shadow Restraints then.

– A set of leather armor comprised of a jacket and pants. It was made with the leather of the color dragon.

– <Chameleon> It is possible for the user to either appear to look like something else or become invisible altogether.

It would be annoying if he decides to hide with that. Well, I suppose I could use [Information] if that ends up happening.

– Batesian mimicry of a centipede-like insect. It was found in the nest of [The Corrupt King of Hell].

– <Centipede Poison> The spearhead is coated with saliva with paralyzing and corroding qualities.

– <Avarice> Ignores all magical barriers, and once it stabs a target, it refuses to get out until the target is dead.

It was a reddish-black spear slightly longer than the average dagger. The centipede legs on the spear must allow it to both cut into the enemy, and allow the spear to dig into the enemy at the same time. I probably couldn't block it with my spear.

After taking a look at the Thief's stats, I turned the page.

Oh dear… The level of the power was quite low, but it seemed to be a lot harder to tackle compared to Memento Mori. This was quite the lineup of abilities.

How do I beat this…?

The abilities listed here were too powerful. It was possible to slow someone's movements, or accelerate their movements to the point of aging them to death. Stopping time can be used as a defense mechanism.

And of course, the ability that I was most curious about was level five.

How would the Thief be able to move if time was stopped? Air wouldn't move if time completely stopped, right? Would it be possible for others to sustain injuries while time is stopped?

"The biggest question is 'how long can he stop time for', is it not?"

Necro seemed to have read my thoughts, and asked me this.

"Well… That's a problem as well. Ah, I suppose it'd be better for all of us to talk about it. About if it's even possible to stop time."

"Well, um… I suppose he uses it because it works."

The saint nodded to that. As I thought, these two are no help… I looked at the two with pitiful eyes, and unloaded my question.

"Let's disregard the fact that we wouldn't be able to move while time is stopped. We need to consider other things first. If time stops for real, air would become harder than concrete, you know?"

"Because molecules of gas stop mid air, they manage to become the strongest material that never shatters under any circumstance."

Necro made a confused face.

"That's why we need to consider if time stops actually work in the first place. Would it actually be possible for someone to stop the time in the entire universe for himself?"

The scale was far too big.

"Fact one. There isn't just one 'variant' of time. Each moving object possesses its own perception of time."

"Perception of time…? What's that?"

It appeared in movies a lot. Characters would go on journeys in space faster than light, and come back to find their child die of old age by the time they come back.

"If he really is able to stop time, he'd have to be able to affect all the perspectives of time for all the objects in this world other than his. Such a thing is impossible."

"Well… It is possible, though? So what's up with that?"

I was able to come up with a simple theory.