Was it really fun for people to lynch a single individual as a group? I don't think I'd ever understand such a feeling.

I looked up at the child that was approaching me. What was in his hand was a dangerous battleaxe.

The Smelter, who came right in front of me, flicked his head, and asked a question.

"Ah~ Seriously. You're su~per boring. Is this all you got? Old man, why don't you have any stamina? This is why you ended up being a loser in a world like this."

"What, are you starting already?"

"Isn't this something that a hero who comes in this world has to do at some point, anyway?"

"That's true. And he's a murderer in the first place, so killing him won't be a sin."

"This is what I call justice, you know? A hero kills a murderer who brought chaos in the world. The strongest murderer in the world at that."

"Wait, so why are you always the only one doing it?"

"Hey, let me try this for once. I want to try killing the so-called strongest."

"Shut up, mage. Can't you tell when you need to stay out of things?"

Seeing how they say 'for once' and 'always', this didn't seem to be their first murder.

In that case, they were below my [standard].

The Smelter tapped my head with the tip of his axe.

"Phew… old man, why did you act out so much? Are you stupid? Can't you see my level? Ah, do you not know what a level is yet? You don't speak English, do you?"

I knew all their abilities now.

"Ehei! Look up! I'll split your head in two so that it won't hurt."

I stood up, grabbed Smelter's babbling head, and turned it around.

I threw Smelter towards Steal More, and chopped off Grand Cheat's head with my axe.

I finished off Ultimate Quiver by throwing my axe.

The only ones left were Steal More, who was struggling to move under the body of Smelter, and Restore, who was trembling in a corner.

When I made my way towards Steal More, the boy raised his hand.

What was he planning on stealing this time?

As strength returned to my legs, I felt something inside me disappear. When I took a look into my status screen, I saw that my Xenoglossy ability had disappeared.

– [Lv.1] Understand languages of other nations.

– [Lv.2] Understand the language of a different world.

"Eh? The fuck? I can't? Why can't I steal other things? This shouldn't be possible?"

Of course he couldn't steal them.

Those two other abilities were our family's heirloom.

They were abilities created after generations of genetic modification, and controlled evolution.

There was no way a software would run, if the hardware was missing.

I, after having regained my strength, stepped on Steal More.

The boy made a funny sound akin to a squashed frog as he died.

There was only one left now.

When I turned, I could see Restore slide down onto the marble floor with a pale face.

A yellow liquid spilt out of her crotch.

I was thinking of getting Restore's help to get rid of injuries, in case I got any…

Restore lifted her arms defensively, and began to beg for mercy.

It almost seemed like she'd run out of breath at any moment.

"Just let me live, please? Let me live! I won't do it ever again! I'll live properly! I'll help people!"

The amount of tears and snot on her face was quite unsightly.

How annoying. She was pulling on my leggings.

Plus, I had to kill her anyway. It'd be troublesome if she ever comes back for revenge.

I put Steal More's blood that was on my foot on my finger. Then, using the blood, I began writing questions on the ground in Korean.

2. What is the aurora I see around me?

3. Personality and power? The way to use it? Price for using it?

Restore's teeth clacked in fear as she looked down on the questions.

"Korean? Are you Korean?"

I wonder if recovery was possible even when a neck got snapped?

It was a lie, though.

She was all over the place.

"Purpose! Purpose is, is, to summon heroes from the other world!"

"Eh… a-around… around… a hundred people?"

I pointed at the second question.

Restore seemed to become confused for a second.

So this aurora in my vision was mana?

I nodded, and pointed to the third question.

I could hear claps behind me.

"Wow, your skill's quite amazing. I knew I had the eye for people."

Restore let out more tears as she ran towards the sound.

I couldn't see a human shape, despite having turned to the location of the sound.

Was he hiding his mana?

The man seemed to be in his mid-twenties.

Restore seemed to be huggin this man.

"Ah, I'll explain the rest for you. You don't need the kid anymore, do you?"

I still couldn't see the man.

But I could see a black mana shape itself into a huge hand.

Its unnatural appearance brought forth interest to me for the first time in this world.

The hand grabbed hold of Restore.

This couldn't really be described with the expression of "grabbing".

—Right, it's more like a snake coiling around its prey.

I saw the limbs of Restore bend in strange ways as she got swallowed by the black hand.

A strange orchestra played in front of me.

Red blood began to spill out from the black hand as Restore's body slowly broke.

"How grotesque. I've done this a lot, too. But the thing is, kids like this just restore their bodies if you don't deal with them like this. I know pretty well, since I have someone like this near me. Ah, sorry for showing you some dirty things the moment we met."

Restore's body disappeared along with the black hand.

"I had no intention of pressuring you or anything? It wasn't like I had anything against the kid I killed, either."

The sound got closer to me. I could smell preservatives and chloroform in the air.

"Ah, quite handsome, aren't you. Nice to meet you. The name's Necro Kill."

I still couldn't see. Even though I could hear him right in front of me.

"What, you don't want to shake hands?"

"Ah, could it be that you're blind? No way? You killed five, no, four of these kids."

It seemed that he was trying to get some reaction out of me.

"How annoying. Can't see, can't talk. Are you supposed to be Helen Keller?"

My body was like this thanks to the electric chair.

"Annoying, annoying. Seriously. Hold on, wait. Right. O.K. What would be nice here~? Since you seem to be capable of telepathy, as long as I convert the ether to sound… Mn? Although you have a 'body', but not a 'heart'?"

It seemed that he didn't have any hostility.

After saying a few strange things under his voice for abit, Necro said "It's done!" as he clapped his hands.

It wasn't my original voice, but.

"Sound is coming out."

Despite the fact that my vocal chords weren't moving, sound was coming out.

"Next are eyes… but, are you really blind? Seriously? Come on, you fought four people. You're playing with me, right?"

Was he planning on fixing my eyes?

"Should I really give you this… Well, damn, I don't really have a choice, do I. You might as well take it as a reward, I guess. Here, take it."

I felt something come into my head.

– A demon eye that gets created at a location chosen by its owner. As long as it's within the range of the Floating Eye, one can see anything around it freely.

A control panel of sorts appeared in my head.

When I pressed the "on" button, I was able to see a clear view on one corner of my vision.

It was the view of the sea.

If I try to look inside, then-

My vision flickered, and the view of the sea switched to a castle on a cliff.

I suppose this is kind of like connecting a VR device with a drone.

Was this a little above the equator?

When I looked around a bit and checked the clothes of the people and the leaves on the trees, it seemed to be autumn.

When I moved the eye to my current location, I could see a bloody floor.

On this floor was a half-naked beggar, and a man in a business suit.

I turned around, and checked myself out first.

It almost seemed like a disfigured clay doll was trying to stand with a hunched back.

The flesh on my body had melted due to the intense heat, and my hair had been burnt away as well.

The clothes I was wearing was a patient's robes.

The other side was wearing a black business suit.

Why was he wearing that?

Unlike his proper, business-appropriate clothes, he wore a skull ring on his fingers.

He looked normal. Too normal.

But it was definite that he was a being that was just like me.

Let's try seeing if it's possible to check out status screens using this Floating Eye.

When I tried to check Necro's information, a status screen appeared. 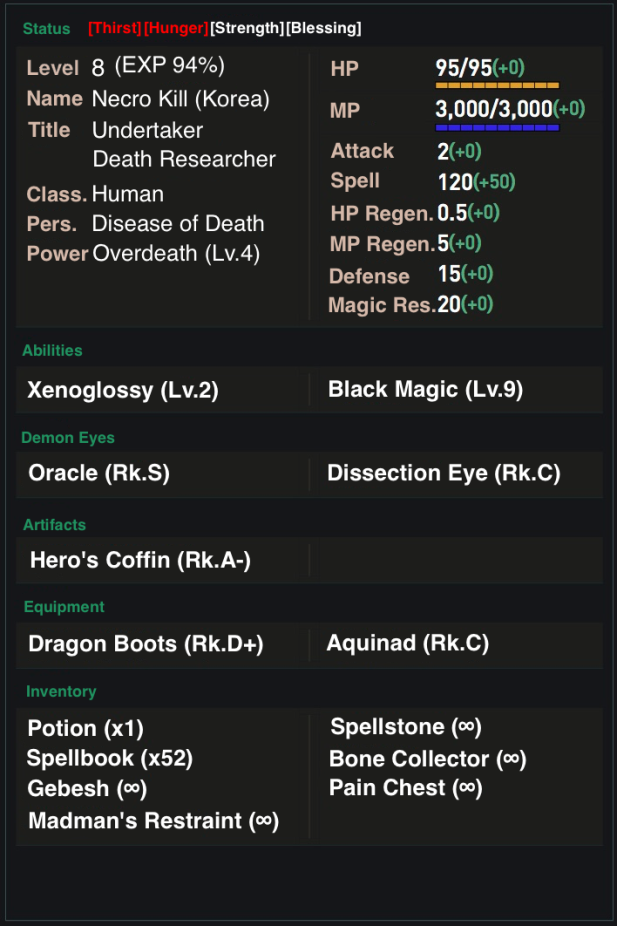