The saint swallowed the bit of bread in her throat, and growled like a mother cat protecting her young.

I decided to stop paying attention to this idiot and turned around to Necro.

Necro warned me of this and showed me a skull ring.

– A ring crafted out of the bones of the demon fish, Aquinad. Those who touch the ring will get his life force absorbed and die. It strengthens the effects of necromancy.

In other words, it absorbs HP and MP. Those who have low health would probably get sick or die instantly.

Necro posed like a model with Gebesh in his hand. He really had a unique personality. I nodded and took a look at his status screen. 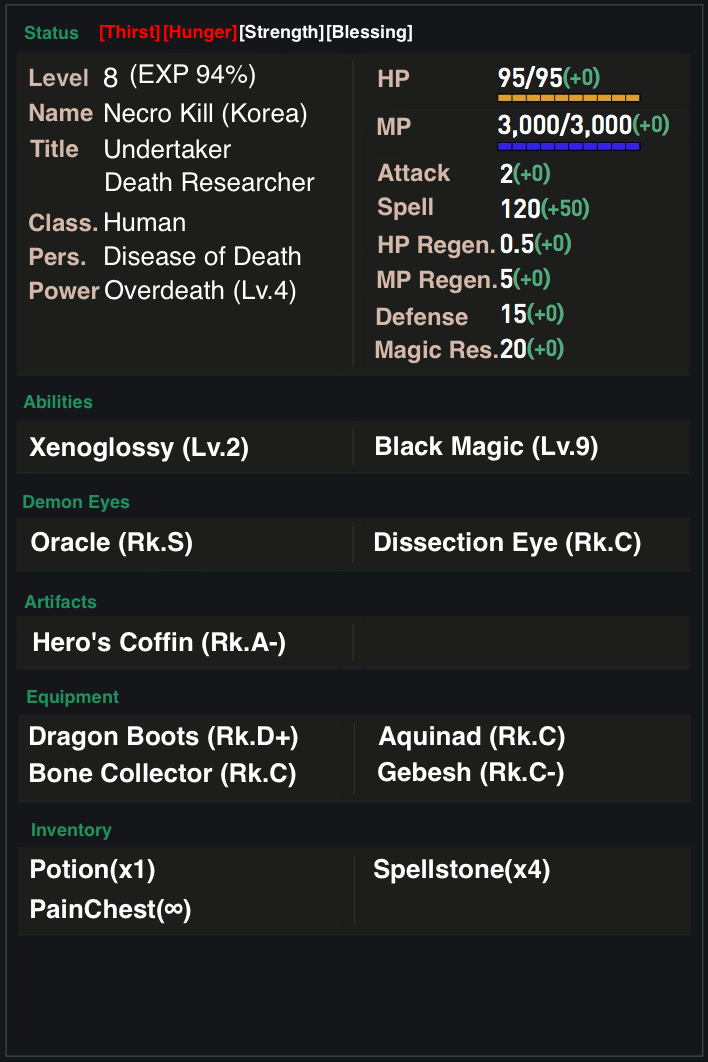 His HP seemed pretty low compared to his MP. But if one took into account the fact that a normal person had an HP of 10, it was pretty damn high. He really felt like a dark wizard.

“Right. You should be at least this strong to be the world’s strongest.”

Necro grinned at my complement.

The saint perked up her ears and made an expectant face, but I ended up ignoring her completely. 32 for attack and 205 for spell power… Since the saint told me that a bladed weapon was worth about ten points, this was quite large. I think 45 defense would be enough to block a blow from an artillery cannon? The defense stat should rise rapidly as long as he reinforces himself with a bit of mana. And that 205 for spell power would mean that he would be able to perform 20 times better than he would with a knife using spells.

“What about the spellbooks?”

Necro made a confused expression at my question.

“Weren’t you holding it when we met the first time?”

He had fifty two of them at that.

“I sold it! Yeah. I was low on money. Times are getting hard.”

Lies. Both the saint and Necro were hiding things. Just what was he planning with the spellbooks?

Necro rushed me, as if he was trying to change the subject away from my suspicions.

…Well, I guess it doesn’t matter. Doesn’t really matter as long as I get items and money.

“Now, the spellstones are basically scrolls that can be used multiple times. I guess there’s only one thing left then?”

The next thing Necro took out was a black box. Each corner was decorated with the carving of a screaming man.

– A tool of black magic that forcibly awakens someone’s power. Transfers the consciousness of those whose blood touched the chest inside to show them unimaginable pain. Most die from the excruciating pain, but those who do survive awakens to their powers.

A tool that awakens powers…

“It’s nothing. Just an antique, you know? They used to make soldiers out of these, but the success rate was so low that they just gave up on it?”

He was making things up again.

“They need to die, but you know, we still gotta bury them properly. You know how countries honor the deaths of famous people? It’s like that. It’s not really used for anything other than my storage device right now.”

It’d be just a waste of time to dig further. The man just had too many secrets that I didn’t care about. Those other than me were worthless, after all. Necro kept talking about his abilities as I thought such things.

“And… As for the magic that I can use… I can use necromancy and earth magic… And fire. Pretty good, don’t you think?”

“I think I explained pretty much everything with this? We can see the rest later in battle. Words have their limits after all.”

The saint glared at me from the sofa.

“I want to hear about the source of your inhuman strength and your two skills!”

Does she think this is a formal hearing or what?

I was planning on telling her from the start.

“Before that, though. I wanted to ask you something, Necro.”

“Eh? What? I told you everything though?”

“No, not that. I want to know about the limits of my body. I’m a dead person, remember?”

“I remember you saying that you’d cancel the magic on me if my body was severely destroyed during the royale.”

“Does that mean as long as you don’t stop feeding me mana, I won’t die no matter what happens to this body?”

The saint was the one to answer.

I thought of a game character that you would control with a joystick after hearing this explanation. The amount of liquid in the body would be HP. If the losses become too big, connection would be lost.

As I thought, that’s how it worked….

I understood why I ‘couldn’t feel the realism in life’.

“Alright. I get it. I suppose it’s finally my turn, then…”

I suppose I should start off with the story of how I came to be. After organizing my thoughts, I began to explain my origins to them.

The late 16th century. A scientist couple managed to come up with a theory that advanced society by almost three generations. This couple, instead of sharing this information with the world, decided to keep it for themselves. Of course, they weren’t sealing the information away. They decided to use the technology for themselves and only themselves. The reason why this was possible was because of one thing. A hereditary knowledge transfer ability known as Whitehead.

Thanks to this ability, the family of the scientist couple began to rapidly gain power. The companies this family created grew day and night. By the 20th century, the family managed to create the strongest military force in the world, and became an international organization. Later on, Whitehead managed to create an underwater colony for themselves, and created a system where they would be able to live without support from the outer world.

“Have you never seen an SF movie before? It’s an environment that allows humans to live in conditions where they couldn’t have lived in before…”

“Ah~ That? I know that. Your family made one underwater? Is that possible?”

“Cold fusion was already achieved in the 18th century. Making a colony isn’t much.”

“I believe they focused on creating a thoroughbred after that point. To try to reach outer space.”

Each generation of Whitehead was developed by matching superior genes together. What was created in the end was a species that could survive even in space.

“Homo Sapiens Caelus. I’m the first of its kind. A [designed human] if you will.”

After nodding a few times, Necro opened his mouth.

“Is he a sufferer of Chuuninbyou? It’s a little… weird for his age. I thought he was crazy, but…”

“And you think it’s ok to say all those weird spells for the sake of black magic?”

Necro shut up at my retort. Our eyes met for a split second. We both decided not to talk further about this matter in a silent agreement.

“In any case, you’re a modified human? I get where that strength comes from then. It’d be impossible for anyone to be that strong without mana otherwise. Alright.”

“But you know, I’m only accepting this because I’m a wizard myself? If you tell this to anyone else… They’ll think you escaped from a psyche ward? Ah, sorry, sorry. Keep going. Whitehead, was it?”

“I suppose… This would be a unique passive skill of sorts.”

It was dangerous to reveal one’s skills to other people, but the gains I’d get in the future made this risk worth it. The man would have probably found out about it later anyway. I opened my status screen, and showed its contents to Necro.

[Hereditary Memories = Whitehead] – A unique genetical skill that only exists in the family of Whitehead. Transfers one’s knowledge to descendents.

Necro thought for a bit, then threw me a question.

“Think of it as me having a hard drive in my head. The only side effect would be that I’d have to sleep a bit longer?”

The organization of information took quite some time.

“And there was, what was it? Cold something?”

“That should be in your head as well?”

“Oh~ What about your last ability, then?”

I opened up my status screen, and showed the info to Necro again.

[Ultimate = Menticide] – A structure of thought that allows one to find, analyze, and make use of information that would allow one to kill someone efficiently. If ‘soul’ is a base OS that is installed in the brain, Menticide is an updated OS made to kill others. There is a severe side effect that comes with it, but such things can be overcome with some effort.

Necro read the contents once and let out a complaint.

“Who wrote this damn thing? So hard to understand. What does it even do?”

I summarized the ability in one word for him to understand.

“An ability to find out ways to kill people.”