On the day of departure.

The saint appeared with a bundle of goods.

Before I could ask her about what they were, she began to unload them onto the table.

Leather boots, a formal suit, and a tiny block.

The saint extended her arms to the side in response.

Nothing in this world is free.

Instead of responding, I began to inspect the boots.

They were black and pretty much resembled military boots. The soles were quite rubbery.

– Boots made out of the leather of [Black Dragon Balmuto]. They are sturdy enough to survive moving greater than the speed of sound. The boots are able to resist even lava when it comes to heat. It was created using strings, dragon muscle fibers, and was tied together using the string created by the bark of the world tree. The soles were made from dragon leather and its claw.

– Protects the feet from corruption and poison.

– Changes size according to its user.

But it's still ranked as D+?

The Oracle's grading scale seems to be quite strict.

It doesn't seem to have a special name, neither does it seem to raise any stats…

It doesn't even raise my defense points.

Well… This isn't a game, after all.

It's not like my defenses would rise just by wearing some shoes.

And this section of the boots are…

I tried applying some force to the heels.

A blade made of dragon bone appeared from the bottom of the boots.

"What's up with those suspicious eyes? I'm going to stab you if you keep looking at me like that."

Of course I'd be suspicious.

These boots could easily fetch an enormous price on the market.

Even if we were comrades, there was no way I'd be gifted something like this.

Not unless the other side had ulterior motives.

"It's a gift for winning in the battle."

It was just a simple suit.

No magic was applied unto it.

"You're not planning on wearing that forever, are you?"

The restraints have been taken away by Necro.

The clothes I was wearing now was a t-shirt and some jeans.

They were pretty big, which made it comfortable to move in.

They cost me around forty dollars.

The saint sighed to herself.

"Just take it and wear it when a dangerous situation arises. This is a gift of goodwill."

I guess I'll repay her with an item of similar value later on.

I shook my head.

The saint grinned brightly at my denial.

"Strip. Now. Or… Could it be that you have a fetish for having your clothes get ripped apart by a girl?"

I imagined the scene and immediately decided to strip.

If it wasn't for her holy element…

If it wasn't for the fact that I lost…

I began to complain to the saint about how restricting the suit was.

I could feel a strange gaze on me from my left.

When I turned around, I could see that the saint was looking at me with fiery eyes.

So I wasn't even human before…?

I pulled down on the necktie with my finger.

This useless piece of scrap was just a symbol of growth and the modern world.

I didn't need it.

I took it off and put it back in the paper bag.

I tried to take off the suit and put on my original clothes, but the saint managed to kick my butt.

The strength of the kick was almost enough to rival a kick from a Muay Thai Champion.

I looked back as I rubbed my injury.

I could see that the saint was pressing on her eyebrows, giving it her all to not let her anger get the best of her.

This is more comfy though…

I'd probably be exorcised if I said something like that.

I'll just stick with the suit.

I sat back down on the sofa.

The saint raised her hand, so I stopped looking at her so suspiciously.

"There seems to be a misunderstanding, but it's not like we're expecting anything out of you for these pieces of equipment. I'm just giving you equipment that we just don't use. Understand?"

Well, if you're willing to go that far…

"No problem. You just have to pay for it with your life later. Your body will do just as well."

I put on the boots immediately and began thinking about what I was going to do with the suit.

I could sell it, but that wouldn't be very nice.

There was a [Vault] ability in the finances section…

Should I use it?

I focused, and activated Heart of Gold.

When I opened my eyes, I could see an endless expanse of land.

So this was the vault…

I couldn't see anyone inside.

I should buy some containers for this place.

I put the suit on the floor and deactivated the ability.

I was back in the original world.

The saint was searching the sofa, as if she was trying to find a pet.

Her little butt was shaking side to side in front of me.

The saint jumped up in surprise.

She turned to look at me.

"I was surprised by you running off like that! I almost contacted the health center because I got so worried!"

"Sorry, I was just testing a new ability."

"Tell me that beforehand!"

I didn't know something like this would happen either.

To think I'd move to a different dimension…

Doesn't this pretty much make me invincible?

It's pretty good for dodging attacks as well.

I should check on the presents first.

I grabbed the little block on the table.

A screen appeared in front of me.

– An advanced weapon from another world. It was used by the [Mirage Belt].

The description itself seemed dangerous.

The dragon boots were D+. Just how strong would an S+ be…

Seriously, this is suspicious.

The saint got rid of my suspicions soon enough though.

That makes it quite difficult to determine the quality of items, doesn't it.

"Isn't Mirage Belt the demon king? What if there's a curse…"

So there was a curse…

"It's just a sword. Dunno why it's called that."

I took Murderer in my hand and observed it.

It was a cube.

It was a cube small enough to fit in my hand.

The black base with a red line running through it certainly made it look like an electronic device.

One of its sides had the words [History Archive] engraved unto it. It didn't seem to erase itself no matter how much I scratched at it.

I couldn't find any buttons on it.

There had to be a way…

"Put it in your hand and say 'activate'."

I followed her instructions with little faith.

The moment I said it, my sight was filled with numbers.

Almost like one of those killer robots in movies.

A machine-like voice rang off in my head.

"It's telling me to enter coordinates?"

The saint shook her head.

Light began to shine through the red line of the cube.

The cube began to lengthen.

Black particles were beginning to fill in the blueprint that lit up in the air and began to take form.

A demonic sword ended up being created by the end of it.

A black shine ran across the long blade, and the hilt of the sword shined like plastic.

Restored? Did the sword get damaged in any way? I can't really tell…

I got curious about my attack stats, so I opened up my status screen. 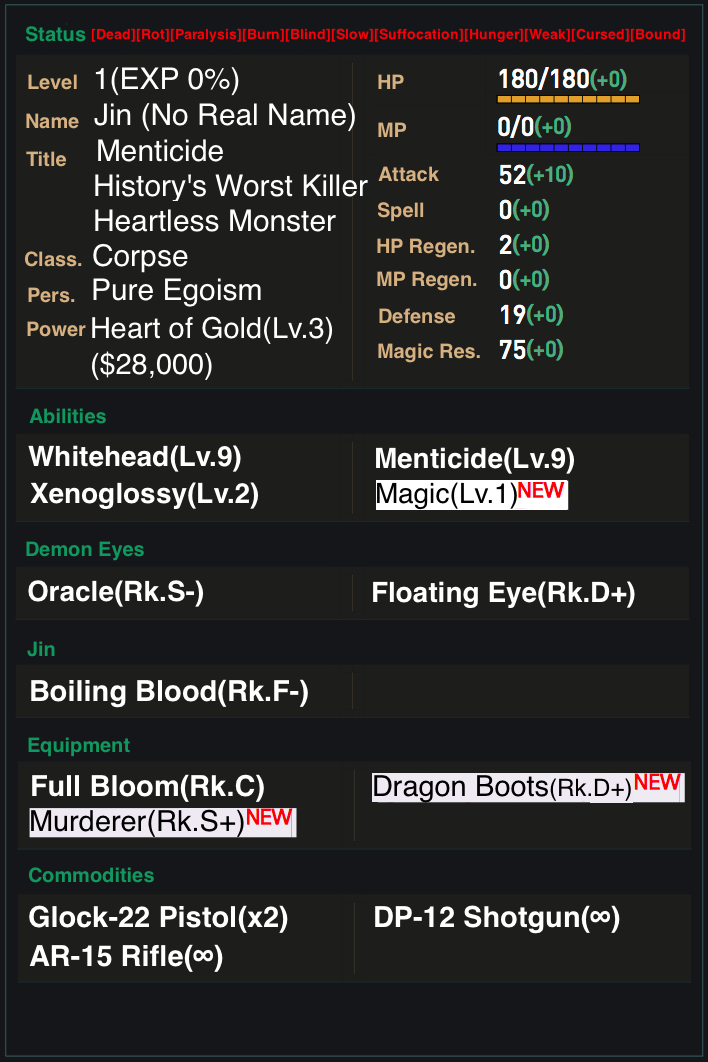 Experience was still at zero percent.

My other stats hadn't changed either.

My attack points, though…

It seemed quite obvious to her.

"Swords are always set with an attack value of ten, unless they're bigger, heavier, or duller."

"Many adventurers and scholars set the base health stat for a normal person at ten."

The saint drew a diagram using the Oracle.

[Using a weapon of ten attack points to attack someone with ten health points and zero defensive points -> High chance of dying.]

It's designed in such a way that as long as one knows how to add and subtract, it becomes possible to avoid danger.

The creator of the Oracle must've been quite a benevolent person.

"Now, here's a quiz~! If a person wearing heavy armor worth fifty defense points got hit in the head by someone with a sword of ten attack points, how much damage would he receive?"

"So then… If someone attacks a person with ten defense points with a weapon with fifteen attack points, would the maximum amount of damage dealt be set as five points?"

"Mm… your calculations are correct. But it could end up becoming six points, or even ten points. After all, this isn't a video game!"

This was the side effect.

Real life had too many variables, and humans were hard to predict.

Just by relying on the Oracle, you could end up with a horrible injury, or even dead.

"By the way, how can I turn this thing into a cube again?"

It was quite light, but it'd be annoying to carry it like this in the future.

Doesn't seem all that useful either.

"Hold it in your hand and say, 'initialize'."

A machine-like sound rang in my head again.

The sword deconstructed itself back into a cube.

"Hmm… This world has a lot of interesting things, doesn't it."

To think a three dimensional object could be folded like paper.

Such a thing would've been impossible without a breakthrough in dimensional science.

"I don't think there's anything more interesting than you right now, though."

Necro came into the room saying this. He was holding a blue bag in his hand.

It was a midnight blue cape, as well as a helmet with four eyes on it.

The horns on top of the helmet made it quite easy to see that this was something Necro had picked out.

Why do they all want to clothe me so much?

"What's up with that 'I guess'? Just say thanks and be done with it! Dear, dear. Oh! Hey, hey, Morto, you should be the one to put it on for him. You aren't that busy anyway."

Necro handed the bundle of clothes to Morto.

"It's a little awkward for me to clothe him, don't you think? You probably saw his body when you put the bandages around him anyway."

The saint glanced at me after receiving the bundle, and began to walk towards me.

I thought about refusing, but ended up walking up to her anyway.

"Sit down for a second."

I lowered my body.

Were they there to hide my identity?

Once I put on the cape and the helmet, I ended up looking pretty cool.

Seeing how they didn't appear anywhere in the status screen, though, they didn't seem to be anything special.

"Oh~ You look pretty cool in that. Better than having your face out for sure."

I began thinking as I heard Necro's compliment.

His attitude towards me had changed for sure.

Probably because of what happened at the battle.

If it wasn't for the new ability that I gained…

I ended up laughing at myself.

So powerless humans were worthless in the end?

Being the victim of such logic made me well aware of how terrifying the words were.