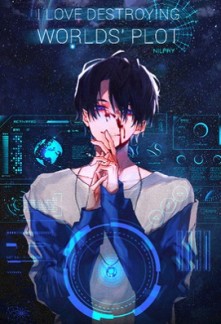 A Nethergod who was supposed to be a Lord that governed the Netherworld as a ruler. Cruelty and Mercilessness are his nature. But despite that his heart only beats for one person. His love, feelings and obsession are for his alone.

One whose memories were sealed for some reason. While the other lost his right as a lord and his soul fragments were scattered all over different worlds.

Then they've met in those worlds. Bullying the heaven's beloved children and destroying the plots of the worlds creating endless chaos. With both the MC and ML having some problems in the brain and are psychopaths. Will the world end or not?

"I will chase and capture you, over and over again. Imprisoning you in my embrace. Until there will be no gaps for you to escape anymore. You are my obsession and my everything."

"Capture me. Find me. As long as you do, I will stay by your side until the end. There is no need for you to know what I did for you."

A hellish ride of two shameless and evil people. The true meaning of their relationship was hidden within those sealed memories. An action packed journey with thrilling and full of suspense events which you wouldn't like to miss!

NO ONE 17 AND UNDER. You have been warned.